One in two businesses failing their staff during COVID

MORE THAN HALF of Australia’s 12 million workers received no support from their employer during the first wave of the coronavirus pandemic, despite having to adjust to major changes in their workplace, new research reveals.

That number jumps to 72 per cent for people who lost their jobs during COVID-19, according to a national study by the Employee Benefits and HR Consulting division of Gallagher.

The Gallagher COVID-19 Employee Wellbeing Study, conducted in July, shows nearly three quarters of all employees faced workplace disruption as a result of the coronavirus pandemic, in the form of redundancies, stand downs, forced annual leave, reduced working hours and cuts to wages and salaries.

Yet the level of employer support didn’t keep pace. Only a quarter of staff said they were offered flexible working hours, one in five said they received counselling or mental health support, 11 per cent said they could access flexible annual leave and only four per cent were offered financial guidance or advice.

The research also showed more than one third (36 per cent) of Australians feel worse about their financial situation than they did six months ago and one in four people (23 per cent) are struggling financially.

Gallagher Employee Benefits CEO Graham Campbell said workers were bearing the brunt of the COVID recession and that some employers were failing their staff.

“The last six months have put enormous pressure on businesses and workers as they have had to adapt to swift economic shutdowns, yet some employers seem to have forgotten how to look after their most important asset – their people,” he said.

“This could have enormous implications for staff retention when the labour market picks up and businesses who dropped the ball find themselves with teams of resentful staff.

“Employers who look after the emotional and financial wellbeing of their people now will be the ones who thrive as the economy recovers,” he said.

The study of people with a job and those who lost their jobs during COVID-19, showed that one in five workers did not feel supported by their employer, and 34 per cent rated their employer’s level of support as average.

Only one in 10 people said their employer was exceeding expectations with how they were supporting staff during the COVID crisis.

The latest economic figures show that Australia is officially in its first recession in almost three decades, with the June quarter GDP numbers showing the economy went backwards by 7 per cent.

“While our research shows workers retain a mostly positive outlook, we still haven’t hit the bottom of the economic crisis,” Mr Campbell said.

“Employers will need to step up as the recession takes a further toll on Australians’ personal and financial wellbeing.”

The Gallagher research showed that 39 per cent of Australians said how their employer supports them directly affects their overall wellbeing, yet 36 per cent said it’s the wrong kind of support.

Women are more likely to feel their sense of wellbeing has worsened as a result of their employer’s behaviour (24 per cent compared to 18 per cent of men).

Overall, Australians said the three most important workplace benefits to them were:

“The next six months will be critical for employers who are under short-term pressure to cut costs, but who will need to retain their core workforce on the long road to financial recovery,” Mr Campbell said.

“But employers be warned – tokenistic gestures will backfire. A gift hamper may show you care but won’t help people who are in financial distress. If you’re genuinely interested in promoting employee wellbeing, you need to provide the kind of support your people need and value.

“By providing a benefit that helps reduce financial stress, employers can positively influence the wellbeing of their staff,” he said.

*Note the study was conducted between 27-31 July, and therefore does not capture the views of Victorian workers during the Stage 4 restrictions, which came into effect 2         August. 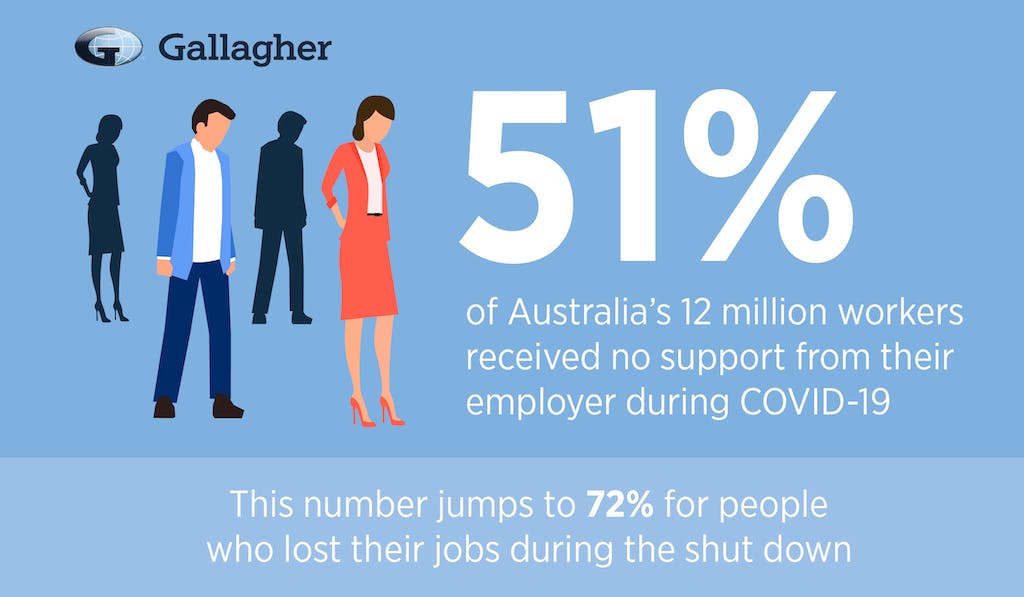 Why you need to Measure the Impact of your Benefits Strategy

Time to update your EVP?